The Key to Understanding Holisitc Health

This Medical Intuitive book gives insight into how the mind, body, spirit connection creates a path to health and wellness, in place of illness and disease. 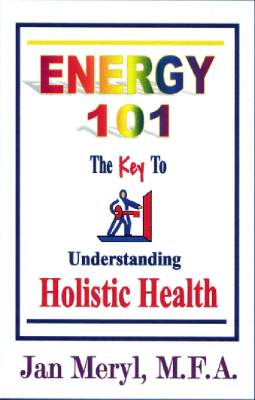 The Key To Understanding Holistic Health

addresses common everyday
questions such as:

Learn your soul’s reason’s for manifesting illness and disease, and how to catapult yourself toward rapid healing.

In:  Energy 101: The Key to Understanding Holistic Health, Medical Intuitive,  Jan Meryl, compiles 15 years of information gathered from spirit guides during Jan’s channeling and medical intuition sessions. Jan tells how to discover blocks to your own health and happiness that are lodged in your energy field and how to go about clearing them from your field. In fact, the third section of this book is a manual of healing techniques that the spirit guides have recommended in Jan’s medical intuitive sessions. These self-help intuitive healing methods have been tested and proved successful in altering the energy fields and lives of many of Jan’s clients.

Excerpts from the book

Many people who seek holistic healers are experiencing a build up of negative energy. Some of my clients are experiencing the effects of being at the core of a negative energy spiral. Their lives appear to be falling apart. Finances, relationships, and bodies accelerate breakdown procedures when the negative energy charge grows proportionately greater than the personal stock of positive energy, because positive energy fuels the creation of health and happiness. The more that goes wrong, the more that one focuses on what appears to be missing in one’s life. As perceptions of lack grow, so do feelings that reality does not contain whatever it takes to fulfill one’s needs and desires. As perceptions feed feelings and feelings feed perceptions, negative manifestations multiply until the person has exhausted the conventional means of assistance and support, including, doctors, psychiatrists, friends, relatives and financial counselors. That is when the angels guide my clients to call me to connect them to their spirit guides.

I am grateful and fortunate to hear from my clients just when they have decided that something needs to change. When a “dark night of the soul” experience happens, the light begins to dawn on them that they had better listen up and embrace a new personal agenda. A dark night experience doesn’t just happen by accident. It happens because they allow their lives to proceed without making the necessary course corrections that would create happiness and well being. I explain to my clients how their free will choices are burying them with every succeeding negative thought and feeling that they are having. In order to change one’s emotional energetic charge, one must make the necessary positive changes in one’s life as well as to one’s choice of thoughts and belief systems.

Blocks in the Energy Field

Feeling Tired? Are You Low on Energy?

We feel tired when:

When two people agree to interact and play out their feelings of lack, they form a cord between them that houses their negative energy. The negative energy comes from the agreed upon false beliefs from the “I Am NOT” list. (This list is available in the complete version of the book). A cord is a very real manifestation in the spirit realm. It serves a purpose. The cord will relay energy between the two parties. It will keep two people tied together. Each one will feed each the other’s issues of lack, until one decides to break free from the negative self‑perception.

Two people that are connected to a negative energy cord are doing a dance. An action by one will cause a reaction in the other. When a negative pattern is recognized, the person who chooses to remove the veil of innocence and see the true issue, may cut the cord in a meditative state. This will help the person to process the lesson more rapidly. When the lessons are learned naturally, the cords are automatically discarded.

Sometimes people get stuck in the dance for very long periods of time. Without realizing it they will go round and round, perpetually repeating the dynamic negative energy pattern. These patterns get moved along from one generation to another. This is called inherited karma.

The patient was recovering from surgery to his leg, and the swelling was increasing. The results were baffling the doctors.

The doctor gave me the man’s first name, and I put in a request to the angels for assistance. I was told that the man was gripped with the fear of aging. He had classic mid-life fears of losing power and virility. I could see that he manifested a problem in his leg because of his fear that he would not be able to stand firmly on his own two legs as he aged. If the man had the cultural background that presented positive benefits connected with aging, which includes the respect and wisdom that accompany maturity, he would not have been suffering from the illness. Instead, he held beliefs and perceptions of loss of ability and power. He manifested the problem in his right leg, which symbolically represents male energy.

The physician then informed me that even though this man was middle aged, he had just married a very young girl in her twenties. This act clearly exacerbated the problem. While on the surface it might have made this man feel young  with a youthful partner, deep down he was combining fear of age together with jealousy of her youth and tossing them both into his shadow.

Marrying a significantly younger woman opened a barrage of fearful thoughts for the patient. In addition to his original fears, he had added the fear that as he grew older, he would have a hard time keeping up with his youthful partner. He also added to that the fear that as his wife aged, she might begin to look for a younger man to replace her aged husband. The result was a manifestation of physical symptoms in his body.

While walking arm in arm with youth might have seemed to calm this mans fears at the time of his marriage, it went on to multiply them and bring them to fruition. Getting to know his shadow motivations prior to choosing a wife might have averted the manifestation of physical problems.  It was clear that this man had some serious work to do to identify, process, and resolve his fears, before he would be able to permanentlyheal and stand on healthy legs again.

Much of the dust that I see in the energy field results from shadow issues that are unconsciously stored away. Shadow energies are a large part of the reason that the victim perspective is so prevalent. When we are unaware of the negative emotional energy that we build and hold on to, it has great power to insidiously produce an unwanted and seemingly uncontrollable personal reality. Shadow energies motivate our internal saboteur.

By moving shadow issues into the foreground and dealing with them, we remove their ominous power to insidiously control circumstances that appear to victimize us. It takes a great deal of courage to deal with shadow issues. It is because of our fear of admitting our judgments and weaknesses that banishes them to the shadow in the first place. Looking at the shadow is the equivalent of opening Pandora’s box.

ENERGY 101: The Key To Understanding Holistic Health, by Jan Meryl,  sheds light on both who we are as human beings and what we need as opposed to what we think we need. It tears away the myths and illusions that trap us in lives of endless frustration, disappointment and loss, fated to repeat our chaotic, dysfunctional and self defeating patterns until we are forced, by illness or total collapse, to find another truth and try alternative solutions. Meryl and her wise spirit mentors tell us how to give up the roll of victim hood and access our inner wisdom to create health, happiness and success. Meryl provides an illustrated step-by-step plan for healing and evolution that is stunningly insightful and dazzling in its simplicity.

I recommend that you take this journey with Meryl and her guides, and join the community of expanding, intelligent, interconnected energy that is rising across the planet at this time.

Energy 101 is definitely the key to opening up the doors of healing on a spiritual level.  As a naturopath, I believe in balancing the Mind, Body and Spirit.  This book helps us walk through problems that interfere with this balance and takes us  into solutions. I highly recommend this book to all my clients.

Jan Meryl is not a medical doctor and claims no formal training in psychology or medicine. All her training has been gained through meditation, contact with spirit guides and many years of learning from the information revealed in her medical intuition readings. Through these modalities she has helped thousands of people to grow and understand who they really are and how they create their own personal reality. Intuitive readings will offer information about the energy that you carry. If you are seeking a  medical diagnosis or treatment, you should see a doctor.

The services provided by Jan Meryl include intuitive perception only. It is the individual responsibility of any and all participants to use your free will to determine the choices that you make in your life that are right for you.  Jan Meryl does not accept any assumed or implied responsibility whatsoever for your choices or actions made subsequent to her readings and use of her self-healing products.  Any referral to another person, product or company is done without endorsement.